A blood diamond (also called a conflict diamond, converted diamond, hot diamond, or war diamond) is a term used for a diamond mined in a war zone and sold to finance an insurgency, an invading army’s war efforts, or a warlord’s activity.

A BRIEF HISTORY OF LIBERIA’S WAR

► 1989-2003, Liberia was engaged in a civil war.
► 2000, Liberian president Charles G. Taylor accused of supporting Sierra Leone insurgency by exchanging weapons and training for diamonds.
► 2005, Marked the most free and fair elections in Liberian history.
► 2005, Ellen Johnson Sirleaf, a Harvard-trained economist and former Minister of Finance, was elected as the first female president in Africa.
► May 30, 2012, Taylor began a 50-year sentence in a high security prison in the United Kingdom. 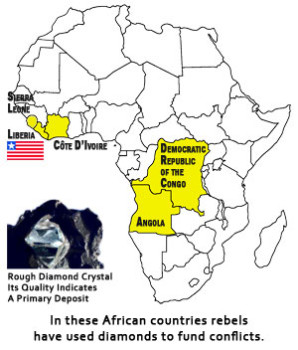 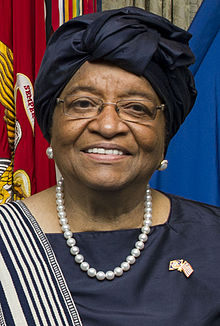 In 2011, Sirleaf was awarded the Nobel Peace Prize, jointly with Leymah Gbowee of Liberia and Tawakel Karman of Yemen. The women were recognized “for their non-violent struggle for the safety of women and for women’s rights to full participation in peace-building work.”

In 2013, Sirleaf was conferred the Indira Gandhi Prize by President of India Pranab Mukherjee.

Ellen Johnson Sirleaf (born Ellen Eugenia Johnson, 29 October 1938) is a Liberian politician who served as the 24th President of Liberia from 2006 to 2018. Sirleaf was the first elected female head of state in Africa.

Having regained peace, Liberia is attempting to construct a legitimate diamond mining industry. The UN has lifted sanctions and Liberia is now a member of the Kimberley Process Certification Scheme (KPCS).

In the aftermath of these brutal civil wars, there are children in the streets with no one to care for them.